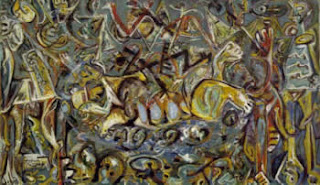 Several ancient myths are played around machines and other artifacts: the Trojan horse, the golden apple of Atalanta (http://en.wikipedia.org/wiki/Atalanta), the Icarus artificial wings, the Sun chariot, the spindle and the loom of the the sexual machine built by Daidalos for Pasiphae who generated the Minotaur (http://www.theoi.com/Titan/Pasiphae.html).
The mythological origin of the water wheel for corn milling is reported by Antipatros of Thessaloniki, a Greek poet of the first century b. C., among the poems of the Palatine Anthology, cited also by Karl Marx in chapter 15 of the first book of Das Kapital.

"Spare the hand that grinds the corn, Oh, miller girls, and softly sleep. Let Chanticleer announce the morn in vain! Deo has commanded the work of the girls to be done by the Nymphs, and now they skip lightly over the wheels, so that the shaken axles revolve with their spokes and pull round the load of the revolving stones. Let us live the life of our fathers, and let us rest from work and enjoy the gifts that the Goddess sends us. "

This myth is a wonderful ante litteram example of women emancipation by technology, the same that will appear when washing machines, in the ’50, changed the domestic life habits. It is remarkable how technology, often considered as a masculine affair, reveals so many feminine presences.
The myth of Atalanta and Ippomenes returns in the alchemical baroque music composed by Michael Maier: Atalanta fugiens (Frankfurt, 1617).
Some electronic examples of the musical variations of Atalanta fugiens have been reported in the hypertext of the exhibition "Un sistema periodico da Amedeo Avogadro a Primo Levi" (Torino, 2001).
http://www2.polito.it/strutture/cemed/sistemaperiodico/s15/e15_1_01.html
Posted by Vittorio Marchis at 12:09 AM