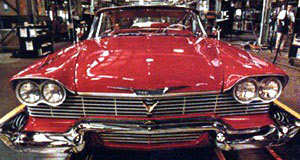 Remember the movie Profumo di donna (directed by Dino Risi, 1974; with Vittorio Gassman and Agostina Belli), the archetype of the more known Scent of Woman (directed by Martin Brest, 1992 ; with Al Pacino)
The connection between sexual attraction and olfactory sensation is clear.
But what is the role of smell in technological attraction? Is there a connection that links the gender of machines? Is it possible to speak about of a gender classification of machines? Which is the role of the five senses (and expecially of the sense of smell) in the technological choices?
Memorable is the scene when Arnie Cunningham mets the car Christine (see the movie Christine directed by John Carpenter, 1983, on a novel by Stephen King):

"George LeBay: Her name's Christine.
Arnie Cunningham: I like that.
Dennis Guilder: Come on Arnie, we gotta get goin', huh?
George LeBay: My asshole brother bought her back in September '57. That's when you got your new model year, in September. Brand-new, she was. She had the smell of a brand-new car. That's just about the finest smell in the world, 'cept maybe for pussy. "
In the very poor bibliography and webography of Macine & Gender, even if the olfactory sensations receive always a minor attention, we can find:

A seminar about Machine & Gender will be held in Turin, Italy, Politecnico, Historical and Documentation Center (www.polito.it/cemed) on monday, February 12, 2007.
Posted by Vittorio Marchis at 12:07 PM